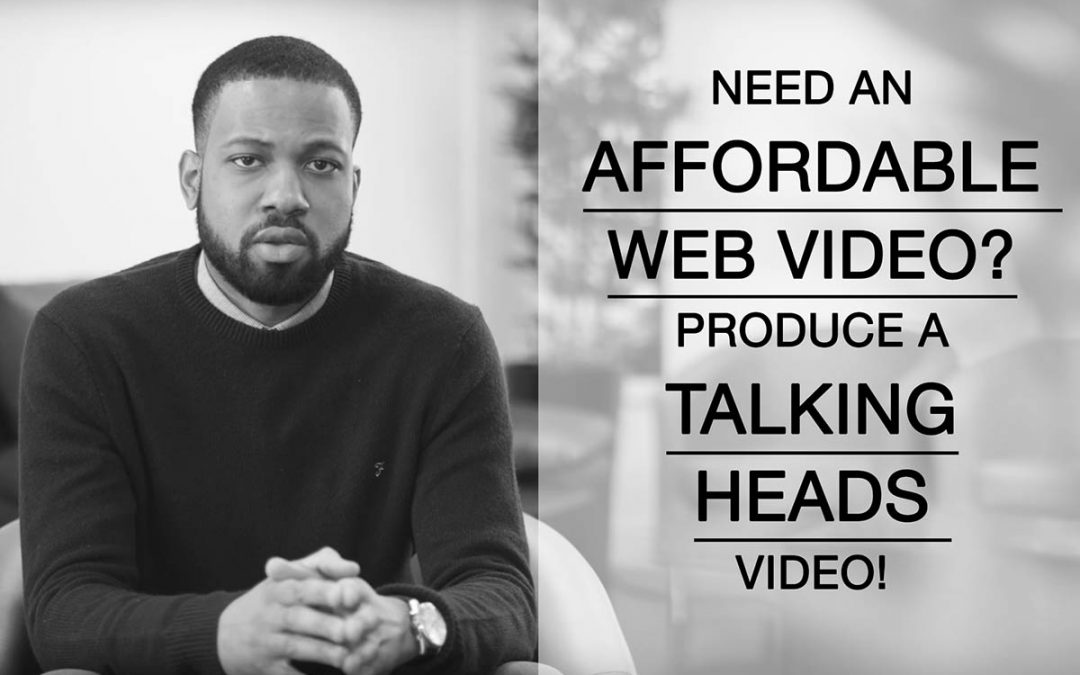 We talk a lot about the  importance of video in traditional marketing and content marketing strategies However it is common knowledge that video production can be expensive. Using talking head style videos is one of the best options of video to produce if you have a limited budget. These videos will serve well on your website and off-page

What is a Talking Head Video?

Talking head videos are videos where the subject is talking directly to the audience (camera) or looking slightly off the camera towards an invisible interviewer.

Usually only the upper body or head of the subject is visible in the video.

Why Use A Talking Head Video?

Talking head videos are an affordable and relatively easy way of delivering your message. This helps better reach customers, potential customers, employees or the wider public. Also, it is a great way to show the people behind your brand. By doing so, you communicate information and build trust in your company.

What Factors Make Up the the Cost of Talking Head Videos?

In this blog we seek to remind readers of the factors that comprise video production costs , as these do not change regardless of the video one is producing. This blog post will focus on those factors relating to talking head videos in particular.

Talking head video concepts are generally simple. Script writing as a result will not be an additional cost. The company in most cases will prepare the message and write the script themselves, alleviating cost.

This is especially true for smaller companies. As for the storyboards – it is clear that in most cases a simple talking head video does not require storyboard development.

You will always have to pay for the expertise of a video production team – irrespective of the kind of video you choose to produce. Producing an affordable web video in talking head style is relatively easy. Because of its ease, even the less experienced should find little difficulty in producing it. Nevertheless, it is just as easy to create a poor looking talking head video if the producer doesn’t know what they are doing. Is the risk worth it?

3. The Length of The Talking Head Video Shoot

The length of time spent shooting is an important aspect of video production budget.

The next factor of video production cost is the amount of locations where shooting will take place.

Traditionally, a talking head video is shot in one location, especially if you don’t plan to shoot any cut-away shots or in a rented space.

Cut-away shots (shots of environment, the places mentioned in the message) make talking head video more interesting, but this sometimes means shooting in more locations. In other cases, this means shooting for a longer time. As a result, the costs will be higher as well.

If shooting will take place in several locations, travel and accommodation costs will naturally apply. In the case of talking head videos, we will spend relatively small amounts in this category as we usually won’t have to shoot in many locations.

Regarding equipment there are two aspects to consider – the level of equipment and the amount of equipment used. You can use pro DSLR cameras for example to shoot talking head videos and it can still look good.

It is important though to light the video properly in any case. In regards to the amount of cameras used – talking head videos can be shot very well on one camera only. This will mean though that the on-camera talent will have to repeat the delivery several times. It is common to use two or more cameras when shooting talking head videos from different angles at once. But this setup will increase the overall budget.

7. Actors, Presenters, Talent and Voice Over

This aspect of video production cost is also variable. It is certainly possible to produce a quality talking head video without investing in set, props, wardrobe and make-up. But in some cases, clients may want a sophisticated look, producing a video with higher production values.

10. The Music Included In A Talking Head Video

Many video production companies use music that is in the public domain or registered under special creative commons licenses. For talking head videos, these tracks are completely adequate for use. The more popular a song or musical piece, the more you have to be ready to spend on a license. Below are some talking head style videos produced by CineEye – one of the most affordable video production companies in London, UK. You can find out more about us at our site https://www.cineeye.co.uk/

The benefit of working with a relatively young company such as CineEye is that you can get a service for an affordable price (we are still only starting to break into the market) and get enough attention from the production team (we still don’t work on multiple projects at a time (this statement is true in November 2017, and we certainly hope things will be more hectic for us in near future).

This is especially the case when we work on smaller video projects such as web videos filmed in talking head style.

If you are looking for an affordable web video, look no further – choose to produce a talking head style video together with CineEye!