A Glimpse Behind the Scenes of Our Latest TV Commercial Production

A popular misconception when it comes to any TV commercial production is that life on set is a lot easier compared to the demands associated with shooting a full-length film or TV show. However, this isn’t always the case.

After being approached by IFIC Money Transfer earlier this year, with a brief for a new IFIC television commercial, you can bet we were more than a little excited. However, creating a high-quality TV commercial production isn’t as easy as just ‘lights, camera, and action’.

Any TV commercial production needs to abide by strict legal and national broadcast guidelines. This being the case, before we could shoot a single frame on set in our London studio, we had to spend hundreds of hours designing and planning every second of the new IFIC TV commercial. Thankfully, IFIC was overjoyed with the final concept which we approached them with. This being the case, earlier this month we could finally get round to making that concept a reality.

Requiring just one actress, one camera man and a single makeup artist, life on set in our London studio was a very intimate affair. However, while using fewer production staff inevitably means that everyone’s individual workload is considerably increased, a close-knit team also helps create a stunning final film piece.

Filmed in front of a green screen, our main challenge during this particular shoot concerned the fact that our actress had to film blind so to speak. That said, this was far from our first green screen TV commercial production. In fact, both our actress and crew were already seasoned in regard to filming this way and we’re pleased to say that the finished results were nothing short of fantastic. This being the case, make sure to stay tuned for more post-production updates! 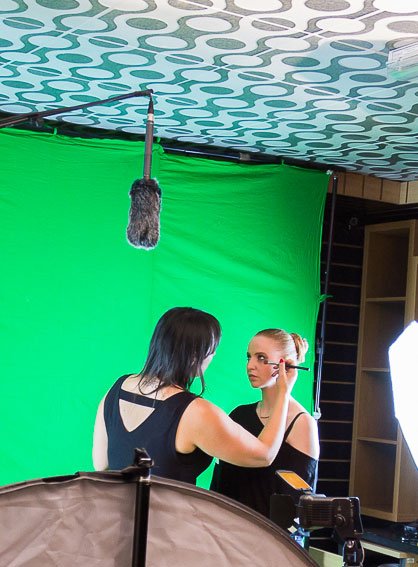